The fifties ; at the first Frankfurt International Motor Show in April 1951, Daimler Benz unveiled the passenger car models 220 and 300. Both had a brandnew 6-cylinder engine with overhead camshaft. Except for its 2.2-liter engine with 80 hp, the 220 model was based mainly on the 170 S. The chassis and car body were almost identical, the headlights were integrated into the front mud guards which had been modified accordingly. In order to do justice to the significantly higher engine power, the front wheels of the 220 model were equipped with duplex brakes.

Like the 170 S, the 220, which first went into serial production in July 1951, was offered with tree different car bodies – saloon, Convertible A and Convertible B. Both convertibles, which were positioned as exclusive and sporty GT cars, replaced the corresponding versions of the 170 S, production of which ended in November 1951.

This W187 220 coupé, which commissioned the US importer is produced by Mercedes-Benz and, was only available for the US market is in an edition of 85 pieces. In 1954 and 1955 the 85 of the W187 coupés were actually sold. That makes the coupé a very rare vehicle.

The fifties, the styling of the W187 was similar to that of the Mercedes-Benz W136 170S except that the 170’s freestanding headlights were for the 220 integrated into the fenders for a slightly more modern look. During 1953 the manufacturer replaced the conventionally flat windscreen on the 2/3 seater “Cabriolet A” with a slightly curved screen, which also found its way on to the new coupé who was introduced at the end of 1953.

At the first Frankfurt International Motor Show. Apart from the 220 model, Daimler-Benz unveiled another new design, which was even more popular with the public: the 300 model, the biggest and fastest serial car of German production of its time. This soon became the favourite car for representative purposes in politics and in industry. We can justifiably desribe it as the true successor of the “Grand Mercedes” of the pre-war era, even though it was never officially given that name. Among the first important personages, who were chauffered in the 300 model were Chancellor Konrad Adenauer, President Theodor Heuss, Finance minister Ludwig Erhard and Social Democratic Party leader Kurt Schumacher, to name only a few.

In September 1955, at the third IAA (International Motor Show) at Frankfurt, another modified 300 model was on display. The new model, internally called 300 c, could be recognised by its enlarged rear window and broader tires. The profound changes, which had been undertaken were not visible on its exterior: Together with the 180 and 180 D models, the 300 c had received a single-joint cross shaft axle, guaranteeing better ride quality.

Like its predecessors 300 and 300 b, the 300 c model was available as a four-door Convertible D. In order to ensure a more unified production and because demand was low, the convertible was taken out of the sales programme in April 1956 and produced only until June 1956.

In August 1957 a profoundly revised version of the 300 model was presented, which, technically as well as regarding its exterior, was clearly different from its predecessor. Its design number W 189 denoted a new construction with its own series for the model 300 d. The 300 d was supplied with the “Detroit-Gear” automatic transmission as standard equipment but on request manual transmission was also available. From March 1958 ZF Saginaw power assisted steering could also be ordered (but not in combination with manual transmission). Since December 1958 Behr air-conditioning was available, making the 300 d the first Mercedes-Benz car to have this option. But with a price of DM 3,500 this was not exactly a special offer.

The body of the 300 d was modernized, especially regarding the roof and rear; through a more filigree design of the C-pillars, the area of glass could be increased by 30 %.

This W189 300 d was delivered by Mercedes-Benz in Stuttgart to its Texan owner. After a 1-month tour in Europe, the car was shipped to the United States. With a mileage of 20,000 miles, the car returned to Europe and became part of the Ockhuisen Mercedes-Benz Car Collection.

As well as the limousine, which, like its predecessor, could be fitted with a sliding roof and/or an partition wall. A convertible D was also available from December 1958. The substantial price difference of DM 8,500 ensured high exclusivity and a low number of units produced.

Technically the 300 S was derived mainly from the 300 model. In contrast to the 300 model. However it had a curtailed chassis with a wheelbase, which was 150 mm shorter. Higher compression and the addition of three carburettors boosted engine power to 150 hp. This made a maximum speed of 175 kph possible. Model 300 S was available as Cabriolet A, as roadster and as a coupé. The roadster basically corresponded to the Cabriolet A, but it had a lighter, fully retractable hood without coach joints. Serial production of the three versions started between June and September 1952.

The 300 S belong to the most exclusive Mercedes-Benz passenger car models of the post-war era and, together with the 300 SL, they are the most sought after models among car lovers.

The fifties October 1951, one month before serial production of the 300 model was launched – another top model, the 300 S model, was presented at the Paris Motor Show. Its completed the now well rounded production range of Daimler-Benz, which – as before the war – fulfilled the highest expectations. This new model was positioned as a parcticularly representative car with sports-car characteristics and it met the highest demands with regards to roadability and speed. That the 300 S model indeed justified this high ranking was demonstrated by the judgement of the international motor press. The press hailed the new model as “car of the world elites” and as a “model for what can be achieved today in automobile construction” . This car also won praise for its “traditional and in this case particularly noble form without taking recourse to aerodynamics”. 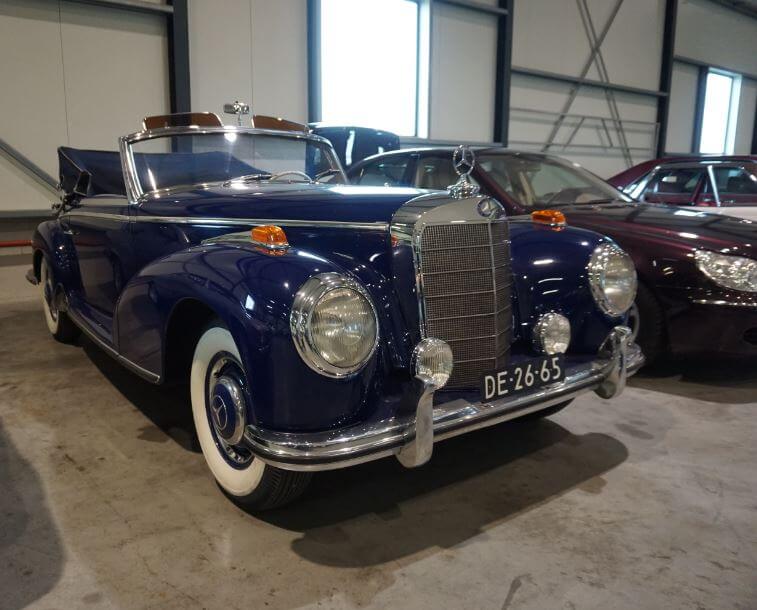 In August 1953, Mercedes-Benz presented the Type 180 – internally code named W 120 , the first passenger car with a ponton-type body. The “ponton” body, which had been built for the first time in 1946 in the USA, was characterised by fully integrated fenders and a rectangular plan. This concept resulted in lower air resistance, less wind noise and also in a much more spacious cabin. Another novelty in the history of the Mercedes-Benz passenger car was the integral body which was firmly welded onto the framework construction. There was a marked improvement in torsion rigidity compared to the conventional construction of the 170 models. 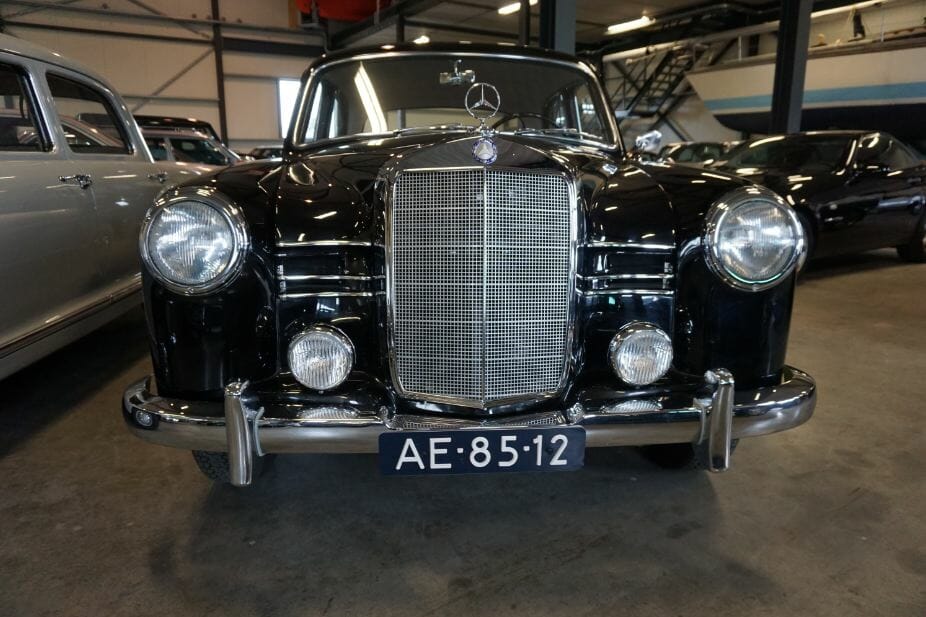 In March 1954, a new 220 model with a modern integral concept was presented. It was based on the 180 model, which had been produced for six months by then. The six-cylinder model, internally code named 220 a or W 180, had an integral ponton-type body, which was firmly welded to the bottom of the framework. Stylistically, too, there was a close relationship to the 180 model; this was emphasized by the fact that for a layman it was very hard to tell, which was which.

1953 – 1962. With the Ponton we still see a continuous single front bench seating arrangement, instead of a separated driver and front seat passenger seat set-up. It is possible to compare the four- (right) with the six cylinder (left) models. Besides a difference in engine size, a slight variance in the length of the hood, as well as the amount of chrome used are clear reference points by which one can differentiate between the two models. 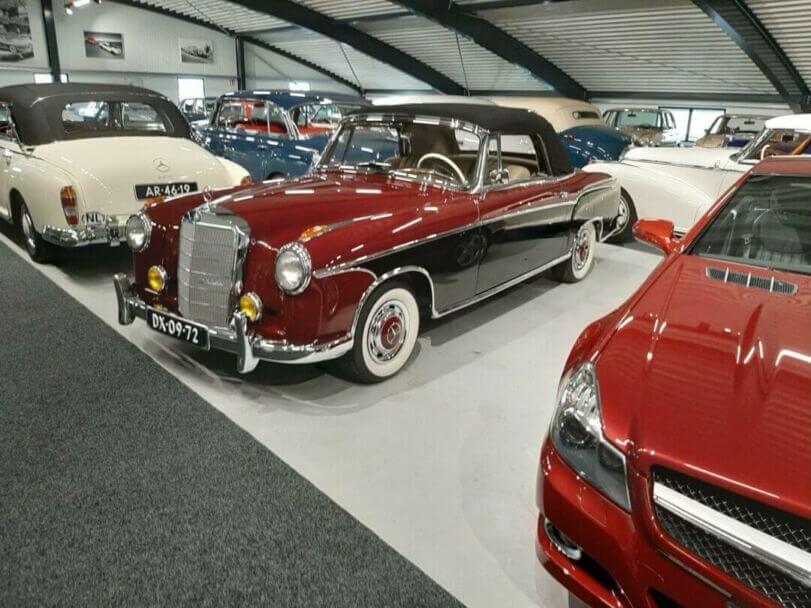 This legendary gullwing coupé was the first true sports-car to be developed by Daimler-Benz after the war. The development was initiated by Max Hoffman, a US-American citizen of Austrian extraction, who had been the official importer of Mercedes-Benz cars since September 1952. For the board of directors of Daimler-Benz, Hoffman’s plan to sell sportscars with the Mercedes star on the bonnet, was a welcome opportunity to open the US-market for Daimler-Benz and so they were easily persuaded. In September 1953 the development of two sports-car models was launched.

The serial version of the 300 SL, which was presented as the result of this development in February 1954 at the “International Motor Sports Show” in New York, was based on the racing-car of the 1952 season. Its salient feature was taken from this racing-car, the unusual doors, which earned the car the nickname “gullwing” in English-speaking countries. 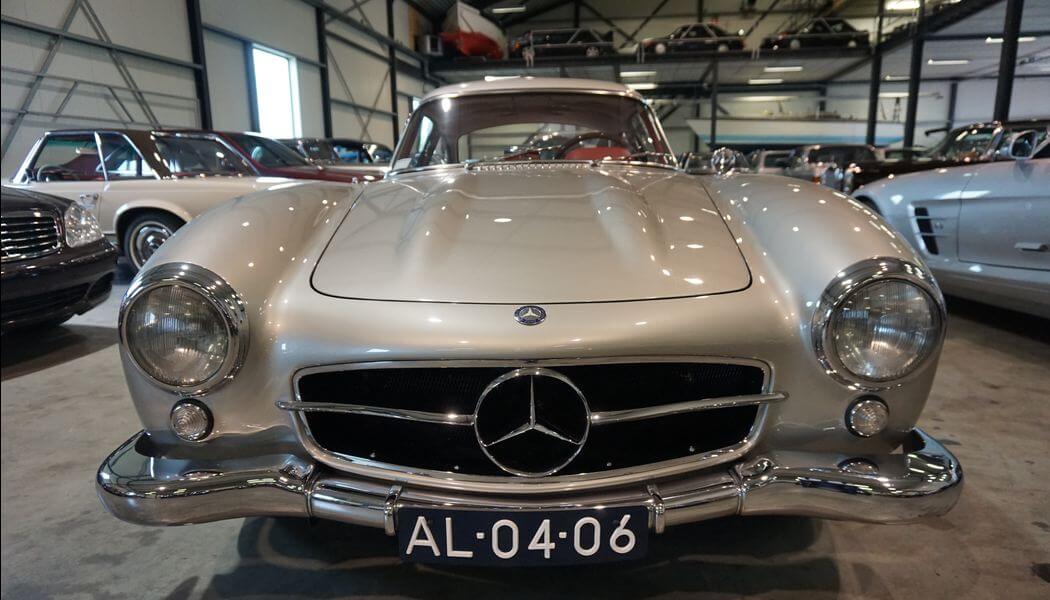 The streamlined body concealed several other novelties. For the first time fuel injection was used in a serial car by Mercedes-Benz. This resulted in an increase of horse power of 40 hp as compared to the carburettor racing car model. The motor was inclined towards the side, in order to ensure a flat and streamlined front design. The lightweight construction – the complete car with spare tire, tools and fuel weighed only 1295 kg – led to the sensational driving performance of the 300 SL: Depending on rear axle transmission a maximum speed of 235 kph to 260 kph could be achieved. 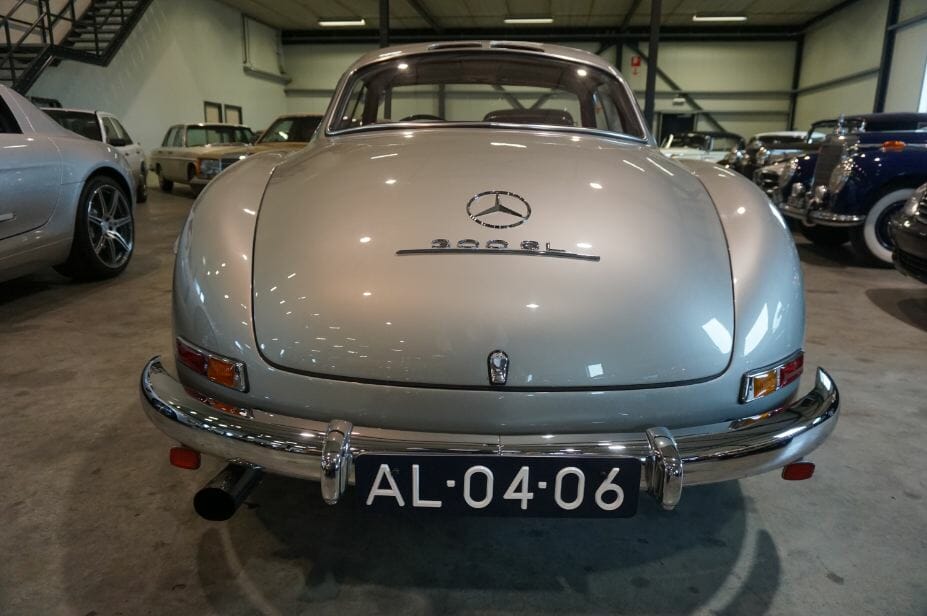 It’s all about the details! This model has distinctive race rims and a special steering wheel. Also notice the bespoke matching luggage set, the price of which could buy you a small new car nowadays.

In a way that resembled the construction of the 300 SL model, which had been put together from existing structural components, another sports-type car was developed on the basis of the 180 model. Relative to the famous wing-door coupé, the roadster 190 SL was not designed to be a true sports car, but an elegant and sporty two-seated GT car. This 190 SL was powered by a new 1.9-liter four-cylinder unit with overhead camshaft which spawned a whole engine family and was also incorporated in derated form into the pontoon-type saloon 190. The 190 SL was presented to the public eye together with the 300 SL at the “International Motor Sports Show”, which took place in February 1954 in New York. While the 300 SL was almost ready for serial production, the 190 SL model was still a prototype.

The final version was presented at the Geneva Motor Show in March 1955 for the first time with marked changes to its exterior. One of the most significant change was that the model now came without the stylised air inlet device on the bonnet. There were lancets above the rear wheel arches as well as modified bumpers and indicators or reflector lights.
The 190 SL came in trhee different version: as roadster with a hood, but without a hardtop, as a coupé with removable hardtop, optionally with or without a hood.

Production numbers demonstrate, how successful the 190 SL really was in its time: Between May 1955 and February 1963, as much as 25,881 cars were built in Sindelfingen, the majority of which were destined for the US market.

In August 1959, a profoundly revised passenger car range was presented. According to the motto “The New Six Cylinder Model – A Class Of Its Own” three completeley reconstructed models appeared as the successors of the fomer six-cylinder models 219, 220 S and 220 SE. Except for some equipment details, the only difference between the new 220 b, 220 Sb and 220 SEb, which internally were allocated to model series 111, were the different types of engines.

All three models had a spacious, elegant car body, distinguished by its salient feature the fintails – a concession to the prevailing fashion, which was heavily influenced by the Americans at the time. It was this characteristic design, which later gave the name to a whole new generation of models. The types mentioned above are today generally referred to as “fintail” models. 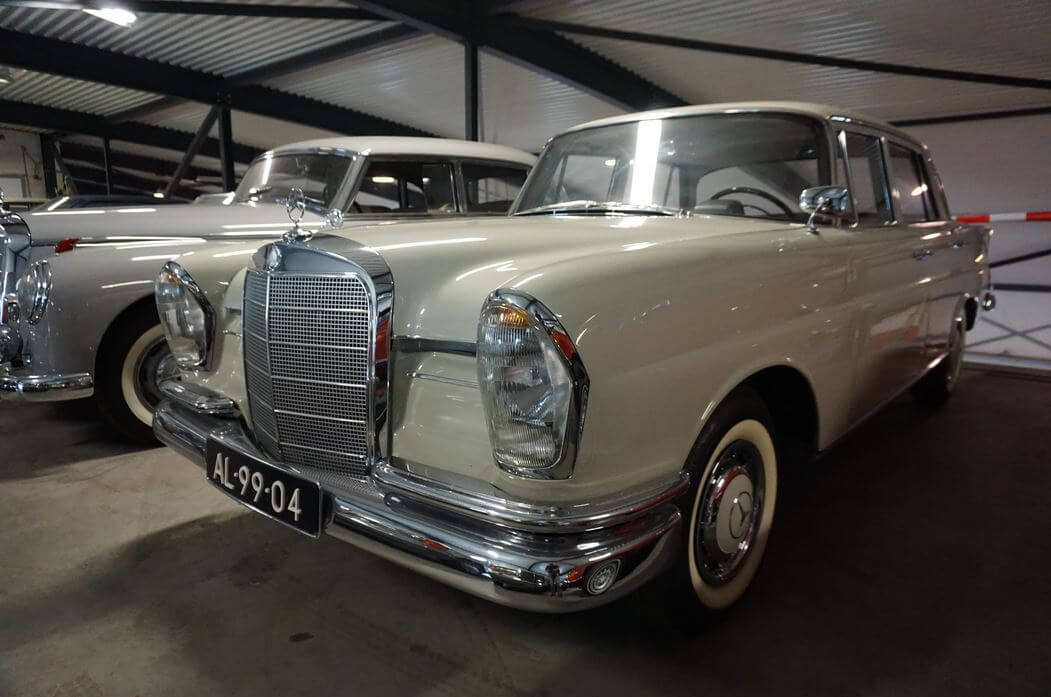 Get to know the Mercedes-Benz cars of the sixties