With the introduction of the new 4-cylinder models, the modular organisation system, which Daimler had consistently pursued since post-war production began, reached a climax, which it was never to reach again. For the first time in the history of the company, cars of the intermediate and top-class product lines did not only use the same aggregates and components, they were moreover fitted with almost identical bodies.

At the opening ceremony of the Daimler-Benz Museum in Untertürkheim, which was housed in a representative new building in order to celebrate the 75th anniversary of motor traffic”, on the 24 February 1961, a new passenger car model, the 220 SEb Coupé was unveiled.

This elegant and representative model became the successor of the 128 series coupé, which after October 1960 had been produced no longer.

From a technical and stylistic point of view, the new model was derived from the 220 SEb saloon, which was presented in August 1959, and was also assigned to model series 111. In contrast to its successor, the coupé was planned as a fully-fledged four-seated model. It was based on the chassis of the saloon the wheelbase of which remained unchanged accordingly. Although the tailfins, which had made such a sensation at the presentation of the 220 b – 220 SEb models, were now apparent in rudimentary form only, coupé and saloon still had many stylistic features in common. This makes the fact that not a single construction element of the four-door model could be used for the coupé even more surprising.

Engine and chassis had been taken over from the saloon without significant modifications. The only important difference was a technical speciality: The 220 SEb Coupé was the first Mercedes-Benz passenger car model to be fitted with disk brakes at the front wheels. 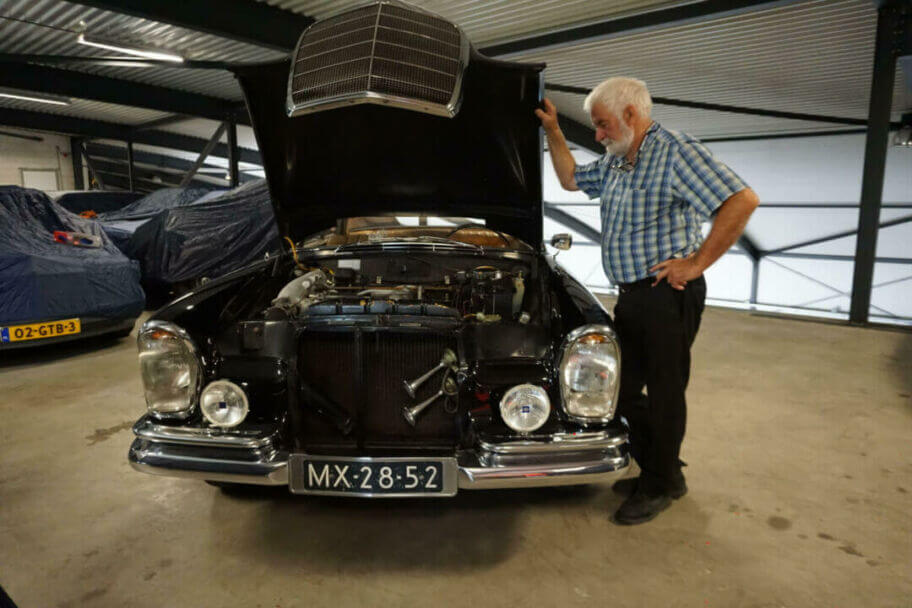 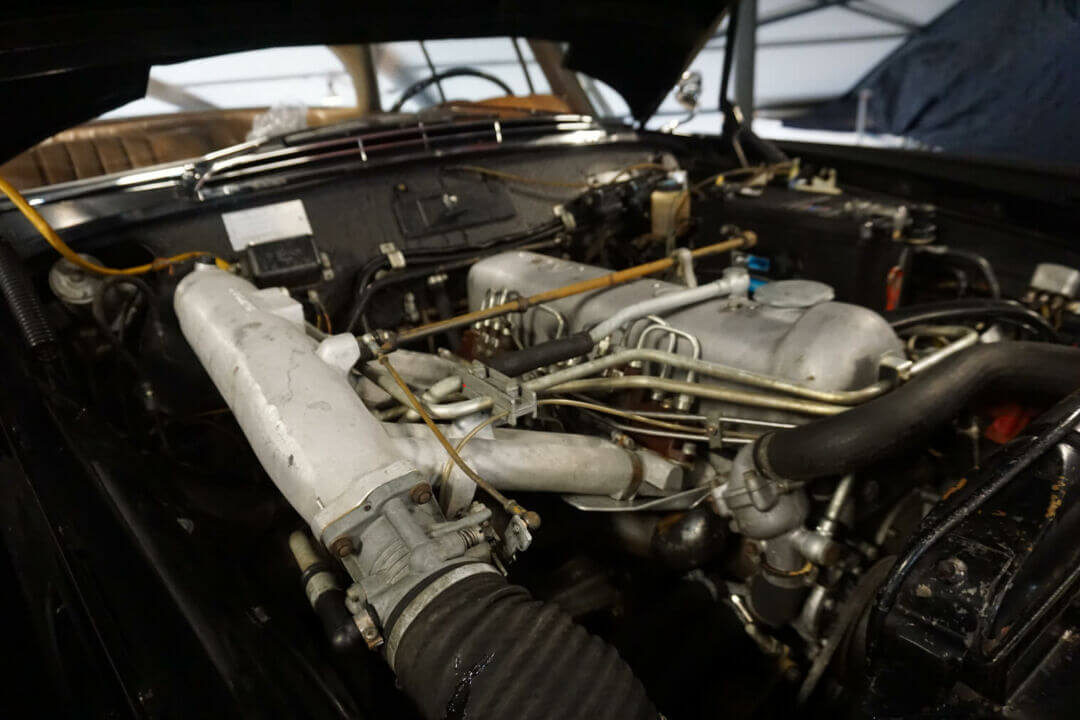 In August 1961, another top-class model was presented with the 300 SE. With respect to its exterior and technical concept it closely resembled the 220 SEb model but many technical specialities were included as standard. Basic equipment comprised not only the 4-speed automatic transmission and the newly developed power assisted steering, but also air suspension, used for the first time on a Mercedes-Benz and allowing a combination of sporty handling and maximum ride comfort.

The brakes of this model, with the internal designation W 112, represented another advance. For the first time a standard Mercedes-Benz production car was fitted with a dual-circuit brake system and disk brakes front and rear.

Its 3-liter injection engine was based on the tried and tested engine from the 300 d, but now had a light-alloy block and was thus approximately 40 kg lighter. Carburation was still on the principle of intermittent inlet manifold injection using a Bosch injection pump. In January 1964 compression was raised slightly and a larger Bosch injection pump was used resulting in an increase in performance from 160 to 170 hp.

The body of the 300 SE was almost identical to that of the 220 SEb, but had more extensive chrome trim. The most prominent distinguishing feature was the chrome strip running from the headlights to the taillights in the side ribbing; additionally, the 300 SE had trims around the wheel arches as well as a broad chrome strip below the doors. The small “300 SE” badges integrated on the C-pillars were less dashy. If desired by the customer, this additional chrome trim could be omitted.

In September 1969 the more powerful 280 SE 3.5 coupé and convertible models were presented. The completely new 3.5-liter V8-engine with 200 hp was very quiet and smooth and made sports car performance possible. These new models, and also the 280 versions with the 2.8-liter 6-cylinder engine had minor external modifications. The radiator grill was lower and wider and the bonnet was accordingly lower at the front. The bumpers were also modified, now being fitted with rubber strips like on the saloons. There were no external differences between the 8-cylinder versions and the new 6-cylinder versions.

The presentation of the 600 model at the International Motor Show in Frankfurt created real sensation. Since the new top model had been designed as an exclusive representative car, intended to fulfill the highest demands, it was serially equipped with many technical details, which taken together, stood for the highest standard that could be achieved in technological terms at the time.

For the first time in the history of Daimler-Benz, a V8 injection-engine was used which delivered maximum power of 250 hp from a 6.3-liter cubic capacity and maximum torque of 51 mkg. In connection with the standard automatic transmission this car achieved a driving perfomance, typical for a sports car. The 600 model, weighing almost two and a half tons, reached a maximum speed of of 205 kph and accelerated in 10 seconds from 0 to 100 kph.

Shock absorbers, which could be adjusted at the steering column during the ride as well as air-pressure supported dual circuit brakes offered a maximum of safety. All four wheels were equipped with disk brakes. The front wheels had moreover been fitted with two double jaw brakes each.

The extemely generous basic equipment of the 600 model, air suspension, powerbrakes, central lock systems and an electronic heating and airing system afforded a maximum of ride comfort and easy handling. Unique hydraulics for extra comfort ensured automatic operation of the following functions: horizontal and vertical adjustment of the front seats, inclination control of the back of the seat, adjustment of the rear seats in longitudinal direction, opening and closing of the vehicle doors, the boot lid, the optional sliding sunroof as well as of the side windows.

Serial production of the “Grand Mercedes” began in September 1964. Apart from a five- and six-seated sedan with 3200 mm wheelbase, three seven- and eight-seated Pullman versions with 3900 mm wheelbase were available: a four-door Pullman limousine with rear seating in a face-to-face arrangement, a six-door Pullman limousine with rear seats and additional folding tables in driving direction and a Pullman landaulet. The last was available in four different versions. The standard version had four doors, rear seating in a face-to-face arrangement and a hood, reaching to the front edges of the rear doors. As a special design, a six-door version with rear seats and additional fold-down chairs in driving direction was also available. As with the six-door Pullman limousine, the doors in the middle could also be ordered without handles. Both landaulets, the four-door as well as the six-door version were also available with an long hood, which extended to the middle partition. 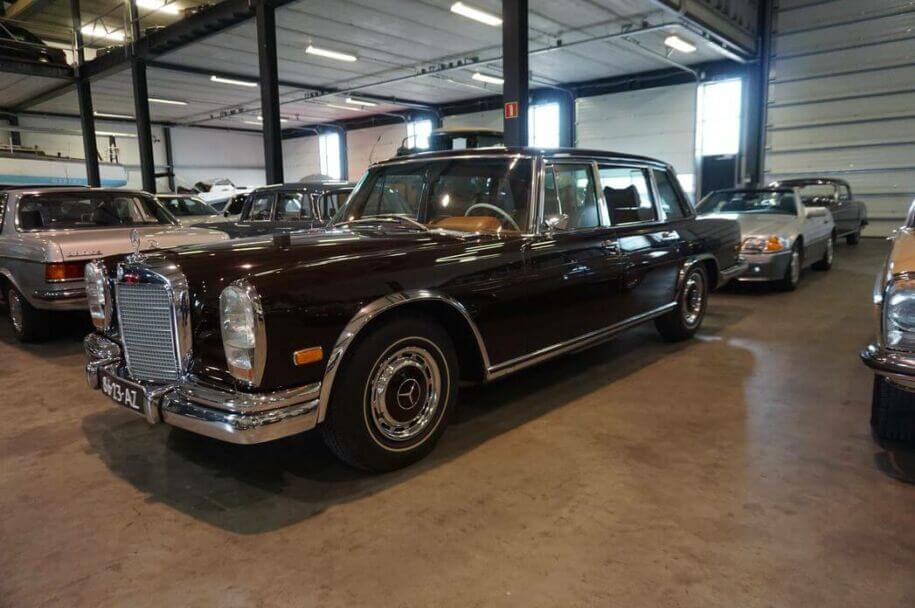 The last 600 was produced in Sindelfingen in June 1981; during a 17-year production run a total of 2,677 of these cars were built, 429 of which were Pullman limousines and 59 landaulets.

The Geneva Motor Show in March 1963 became the scene of a remarkable debut which was widely covered in the media: With the Type 230 SL Daimler-Benz presented a new sports car which was to replace two models of the former sales programme at once. The new model was faced with a major challenge – not only because its two predecessors, the 190 SL and the 300 SL, had been extremely popular from the start and the 300 SL had even become a legend during its lifetime. The real challenge was the fact that, despite many similarities within the family of models, both models represented two radically different design concepts and it turned out to be rather difficult to make out something like a common denominator.

In a sense, the new model represented something of a compromise: the 230 SL, internally code named W 113, was neither an irredeemably tough roadster, nor a gentle boulevard-sports car – rather, it was a comfortable two-seated GT car with an excellent driving performance and maximum driving safety.

On 27. February 1967, the 250 SL, which was to replace the 230 SL after four years of production, was unveiled to the public. The newcomer, which was serially produced as early as December 1966, had the same exterior as its predecessor. Basic changes related to the engine and the brakes, which were derived from the 250 SE model in slightly modified form.

Beside the three 230 SL versions an optional fourth version was available for the 250 SL – a coupé with seats in the rear, which was presented for the first time in March 1967 at the Geneva Motor Show. The additional space, which had become necessary for the incorporation of the rear seats had become available after the roadster hood and hood box were removed. Because it was impossible to backfit the hood, this version was to be recommended only in areas with little rainfall or after closing the coupé hood.

The collection Pagoda is the Californian Coupe (2+2 version)

In August 1965, another generation of top-class models was presented with the Types 250 S, 250 SE and 300 SE, which succeeded the fintail types 220 Sb, 220 SEb and 300 SE. What all three models had in common was its body, which had been designed by Paul Bracq. Its main charm was the simplicity of form, which avoided all fashionable detail, and its restrained elegance, which even today, kept its timeless essence. From a technical point of view, all models closely corresponded to their predecessors

Production of the models 250 SE and 300 SE was stopped at the beginn of 1968; as their successors in January 1968 the Types 280 S and 280 SE were presented; they were distinguished from their predecessors only by a different engine and other equipment details. The new 2.8-liter 6-cylinder engine delivered 140 hp in its carburettor version and 160 hp with fuel injection. A more powerful version of the injection engine with 170 hp was not only built into the 280 SL, but from January 1968 into the 300 SEL, too, where it replaced the former 3.0-liter light-alloy engine. 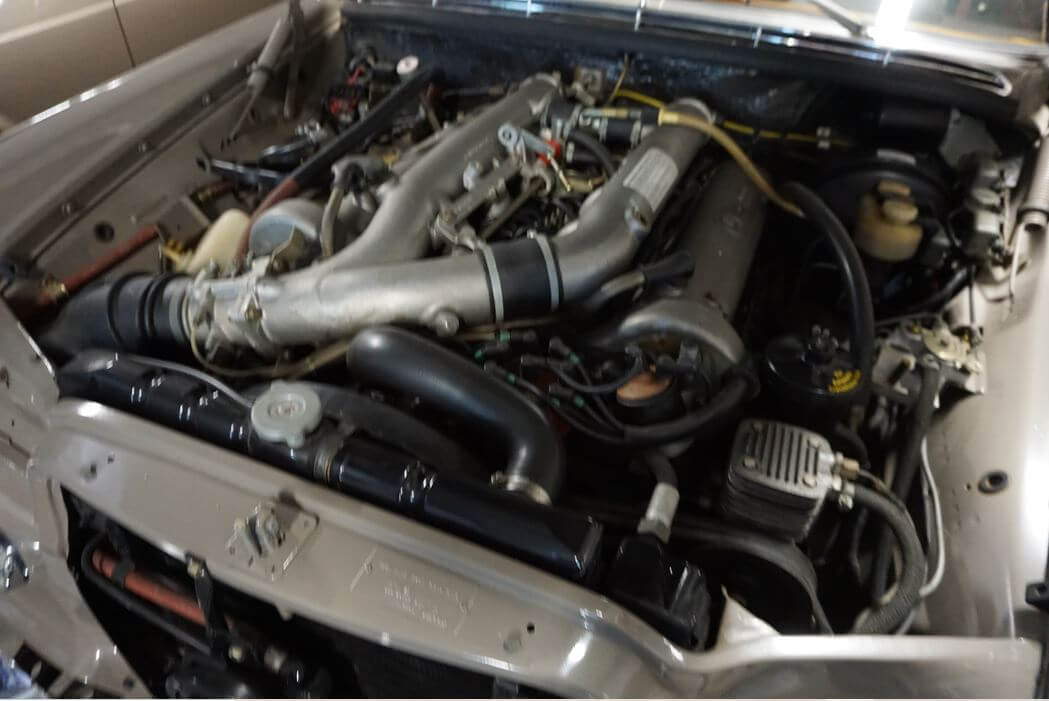 In March 1968 the 300 SEL 6.3 became top of the class of this model series. It was equipped with the V8-engine and the automatic gearbox of the 600 model so that its power was equal to that of a high-level sportscar. Its presentation at the Geneva Motor Show created a sensation, especially since there had been no hints, that a model like this was to be forthcoming. From outside, the 6.3 could only be recognised by its broader tires, double halogen headlights and additional distance beam headlights. Even though it cost over DM 10.000 more than a 300 SEL and twice as much as the 280 SE, many customers were interested in the 300 SEL 6.3, so that 6,526 units were produced.

The Mercedes-Benz 300 SEL 6.3 is a luxury car built by Mercedes Benz from 1968 to 1972. It featured the company’s powerful 6.3-litre M100 V8 from the luxurious 600 limousine installed in the normally six-cylinder powered Mercedes Benz 300 SEL. The result was a nearly 2-tonne saloon with performance similar to most dedicated sports cars and American muscle cars of the era. At the time of its release it was the world’s fastest four door car.

in January 1968, a “New Generation” of intermediate-class cars, too, was presented. The original range of model series W 114/115 comprised six models, from the 200 D with 55 hp 4-cylinder Diesel-engine to the 250 with 130 hp 6-cylinder carburettor-engine. The top model, the Type 250, could be distinguished by its exterior from its more profane brethren; it was the only model to sport a double bumper at the front.

The 4-cylinder Types 200 D to 220 were bracketed together in series W 115, while both 6-cylinder models 230 and 250 were assigned to series W 114. The models of the “New Generation” are called “Stroke Eight” models, a reference to the date of their appearance.

In September 1973, the whole 114/115 series underwent extensive model revision; countless details, which had been introduced into the SL and SLC Types respectively, and also in the S-Class now were incorporated into the models of the less prestigious product line, improving the general safety concept.

Get to know the Mercedes-Benz cars of the seventies